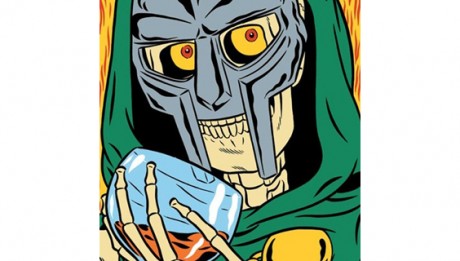 Care for Some Doom?… “Doomsayer RMX” by Young Guru.

True to his world dominating ways, the villainous Doom (a.k.a. MF Doom) has made another rather mysterious appearance with the winter release of “Doomsayer RMX” by Young Guru.  Without missing a beat, Doom delivers lyrics so crazy that you’ll probably just wonder as you stare. There may even be a maniacal laugh.  It’s no doubth that the Metal Faced artist has a highly evolved approach to rhyming, one that few have challenged since he first arrived on the scene many years ago.  As he makes casual reference to “sanitary napkin bins” and “the Rodin Coil” in between his declarations of reworld reign, Doom lets you know what you’ve been missing.

Last we saw the masked man was during the release of the JJ Doom Exclusive Mixtape, along with artist Janeiro Jarel, in late summer after a long hibernation.  Why can’t this dude just make an announcement instead of all these random sightings?  Whatever the reason, this latest release is making us hope and fear that an album of some sort is on the way.  Unless he disappears once again into the darkness.. (faint sinister chuckle).

Check it out below and enjoy