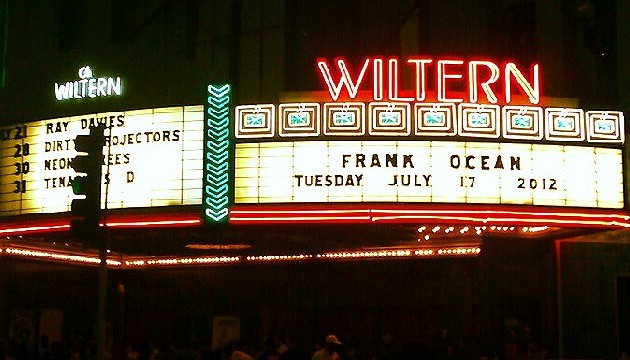 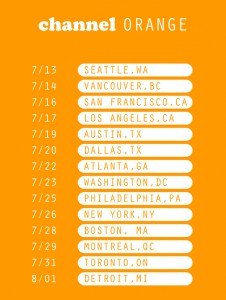 Being a person who hasn’t attended many R&B concerts in the past, I didn’t know what to expect from Frank Ocean’s show at The Wiltern in Los Angeles as part of his Channel Orange tour last night except for the fact that I was in for a treat. While some were more enamored with the attendance of such celebs like Drake and Keri Hilson, the majority of concertgoers were awaiting an unforgettable performance. Suffice to say, we got what we wanted.

Frank’s refreshing honesty, as it’s been well documented recently, was one of the highlights of the night. How many artists you know can get into an accident on the way to a show and still keep it together all while letting the audience in on it? 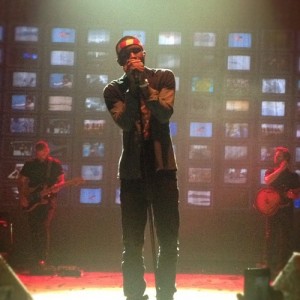 Moving past his harrowing ordeal, the man of the hour started things off smoothly with Summer Remains, an unknown gem only known by the most astute fans got a glimpse of via his Tumblr page. My friend Jeni (who’s a bigger fan than me) pointed out her slight dissatisfaction for what she calls a noticeable transformation of the song far from its original vibe, a fact I wasn’t too familiar with but alas, I was able to share her disdain. Besides his new offering, Frank delivered a little something for everyone: his older material (Novacane, Strawberry Swing), a couple covers (American Wedding, Miss You) and a good portion of his latest LP, which officially debuted #2 the Billboard Top 200 albums chart with over 130,000 copies (awesome!). Personally, I thought he should have added Swim Good (my personal favorite) to the list but beggars can’t be choosers I suppose?

Another memorable moment in the evening reflected some more of Frank’s impeccable candor. Midway through the song Forrest Gump, he brought everything to a halt for a redo. Why? He attributed his being out of sorts to the accident he mentioned which caused his delay, giving fans another reason to appreciate his heartfelt performance. Even his plea for compassion garnered a newfound respect for the budding R&B artist.

“Can you forgive me Los Angeles?”

He didn’t even have to ask.