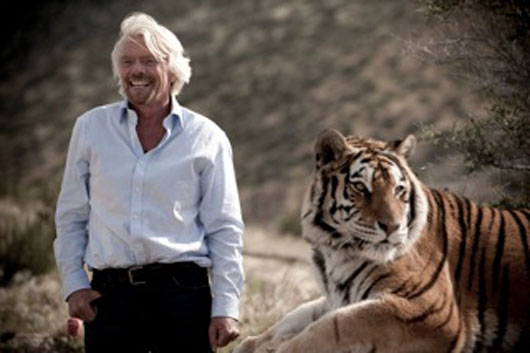 Virgin Atlantic launched a new human trafficking initiative this fall. Virgin is the first airline to work with the UK Border Agency to train their cabin crews, target suspicious behavior in passengers, and take effort in ending human trafficking. Virgin’s “fun’draising” campaigns this year also helped to provide clean water to over 7,500 people in Kenya.

As of October 2011, Virgin Atlantic was the first airline in the world to create a low-carbon aviation fuel. Working with Lanza Technology, steel production waste gases are captured, fermented, and converted into jet fuel. These waste gases normally become carbon dioxide in the air we breathe, but can now power the skies. Currently in pilot mode in New Zealand, Virgin Atlantic hopes to use it on flights within Europe in the next few years making this the new standard for the airline industry.

Working with Wild Aid, Virgin Unite is helping to save some of our endangered wildlife. In India, there are only 1,600 Tasmanian tigers remaining. Branson believes “We must help ensure that not one more inch of land is lost for the tigers and that people in local communities can always live in peaceful coexistence with this beautiful creature and prosper.” Virgin Unite is also focusing on shark fishing and fin trade with California’s Governor Jerry Brown and the Marshall Islands, hoping to expand efforts further into the pacific rim.