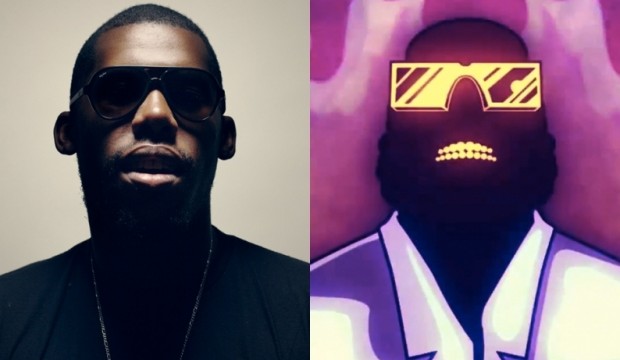 Read an exclusive report of the animated MC’s unmasking

This morning, Flying Lotus released the Elijah Wood-featuring music video for pensive Until the Quiet Comes track “Tiny Tortures.” It’s rad and recasts the Wilfred star as a recent amputee who uses his mind to craft a new, Akira-style cybernetic arm — but that news has been overshadowed by a different story.

The villainous cartoon cat is out of the bag. On November 15, the enigmatic animated rapper known as Captain Murphy dropped a 35-minute short film-as-mixtape dubbed Duality, and we reported everything that was known about the bearded bad guy. Everything except his identity.

Well, last night, after hemming and hawing on Twitter about whether he should, the Captain decided to perform his songs in person at Los Angeles’ Low End Theory night at the Airliner, ground zero for the West Coast beat scene movement helmed by Flying Lotus. And, as some had surmised, Captain Murphy is, in fact, Flying Lotus.

Earlier in the day, Murphy shared a link to download Duality Deluxe (now via DatPiff), which finds the original streaming mix separated out into 16 tracks, packaged with artwork for each one. That’s free, along with the instrumentals, and dude’s pressed up some tees as well, though a bit nicer than the presumably bootleg one Daniel Tosh was spotted sporting on his show.

There was much speculation that the deep-voiced MC, who clearly fancies himself a cult leader, was Odd Future’s Tyler, the Creator. While Earl Sweatshirt turned up to rap on his Murphy collab “Between Friends,” his pal never set foot on stage. SPIN’s Jeff Weiss was on the scene and delivered this exclusive report:

Captain Murphy demanded cult shit and he got it.

The line outside the Airliner in Lincoln Heights snaked for three blocks in anticipation of the unveiling of the animated rapper behind Duality. Rumors that Tyler and Earl Sweatshirt were somehow involved brought out a wave of gaunt teen Odd Future supporters in doughnut and cat shirts, adding to the crowd of underground rap fans and beat heads there to see Pac Div, King Henry, and the usual Low End residents. At 11, Murphy introduced himself via his sinister Vincent Price laugh. The crowd was so rowdy that they had to be repeatedly instructed to stop pushing, lest Low End Theory wind up on the morning news.

In response, they chanted “CAPTAIN MURPHY” like starved cannibals.

Cowled in a sequin hoodie, face obscured, and looking like a masked professional wrestler from 1983, the Captain started rapping through cuts from Duality — his voice was rough and raspy as on the record, prowling around the stage, stoking the crowd to cyanide Kool-Aid levels of obedience. A smiling Sweatshirt bounded on stage to help perform “Between Friends,” to make things further frenzied. Then at the moment that the energy level stared to lag, Murphy removed the hoodie to reveal that he had been Flying Lotus all along. Before he disappeared into the crowd, he instructed them with a smirk: Tell no one.

And now, the David Lewandowski-directed video for “Tiny Tortures,” by Flying Lotus: