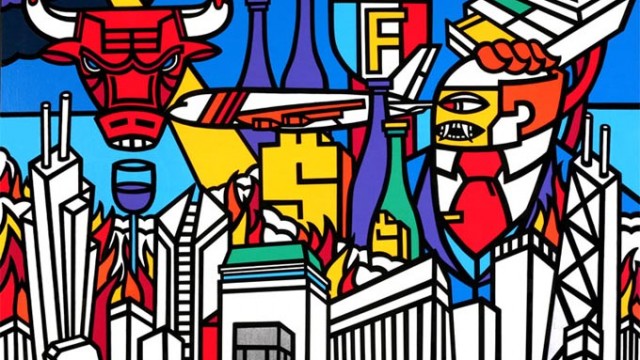 We caught up with Chicago based artist Jason Fennell (a.k.a. Homeless Cop) to talk about art, life and upcoming projects.  His work has been featured extensively on Cartoon Network, with musical accompaniment from his own band Classy Janitor.  If you’re a fan of late night Adult Swim, no doubt you’ve seen his animated bumps between programming.  As the ubiquitous Flying Lotus rose to fame through this avenue, so has Fennell with his standout artwork and very own sound.  His technique with acrylic paint markers is an arduous  process in which he details images with bold color and crisp outlining, spending countless hours on each unique piece by hand.

In addition to his paintings and animated work, Fennell has also developed a product line of apparel and skateboards which quickly went into high demand as limited quantities sold out faster than they could be produced.  No doubt the value of his paintings and also limited edition wearable art will go through the roof in years to come.  Lucky for us, he’s got more on the burner coming our way soon.
L|T|M interviewed the artist and this is what he had to say:
What is art, for Homeless Cop?
The pictures speak for themselves, but I feel like making Art is an expression of freedom and I love looking at art and diving into that world and just being there.
What is the process of your work with paint markers and acrylic?
Well, I pretty much paint like I draw, so I use paint markers. Plus I hate cleaning brushes. It’s a very tedious process of layering colors and then making it all crispy with the black lines.
What prompted your relationship with Cartoon Network, and what can you say about working with Adult Swim that’s been particularly interesting?
I prompted it by just creating art for the people I love and handing it to them. I’m just really happy with the sweet treatment I’ve received from Adult Swim, and particularly, Eric Wareheim (of Tim & Eric) Honestly, I like everything Adult Swim is doing, and I’ve been one of their biggest fans from day 1.
Your bumps are getting a lot of attention.  What is some of the inspiration there, and how do you work with the music?
I am half of “Classy Janitor” me and my friend Kenny made the music. We just busted out keyboards, drum machines, and computers to make all original music. The music, like the art, is really just inspired by my love of all things Adult Swim. Classy Janitor’s full album is available for a free download on HomelessCop.com
What is the story behind some of the more consistent themes in your work (i.e., the cat, chicago skyline, world domination, tits & ass)?
I basically make characters I’d like to see, and as far as the computers and buildings and stuff, I just think those things are cool. I think I wanted to be an architect when I was younger until I learned it involved math. I fucking hate math. Never really had a computer growing up, but I was an outdoors kid anyway. Who doesn’t like tits and ass?
Tell us your thoughts on Art for Sale, does it ruin or improve it?  You obviously make a lot of statements on our current socioeconomic state – how does this affect profitability? Or, do you even care during the process?
How does making art for sale ruin it? Now, I’ve made free paintings for people to get in the door here and there, but I put thousands of hours of time and money into my craft, so I feel like it’s worth it. I’m not in the art business to make money, I’m here to get my art on people’s walls or on their shirt, so my art is out there making some kind of impact. As for content, I’m not making any statements, I am only making things I like and people can take what they want from that. During the process of making art, I really only care about getting it done. Current socioeconomic what? Yeah, no, I’m just making stuff I like.
What are your artistic and musical influences?
This is easy: Jean Michael Basquiat and Nirvana
Do you really live in a haunted hotel? We keep hearing about that so we had to ask..
My building used to be an old hotel, and it was built in 1919. Charlie Chaplan and Al Capone used to hang out down in the old ballroom (it’s now a gym). I used to work in that gym years ago, and yeah, all kinds of haunted stuff was going on. I have not seen any ghosts in my apartment yet, but I’m sure ghosts can go wherever they want. Also, I found the dead body of a kid that committed suicide and landed on the gym roof. That was super sad and my friend did some “ghost hunting” stuff at that spot and the fire alarm kept going off. No batteries.
Can you tell us about any upcoming projects that we can look forward to?
In the works right now I have a big new collection of paintings, skateboards, and I’m going to make some more t-shirts again. Also working on some new cartoon animation projects, some are just awesome and funny and one is a revenge cartoon against asshole design firm dickhead owners (you know who you are) Just hit up HomelessCop.com and check for updates.