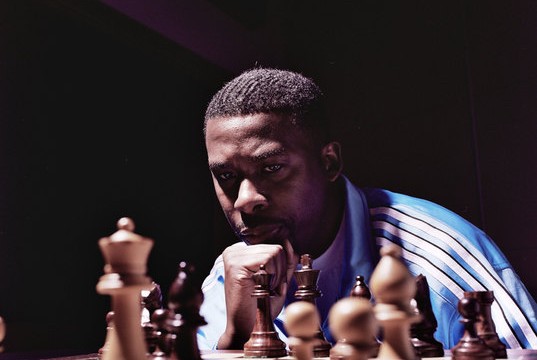 Legendary hip-hop artist raps about science in his new album and brings that message to schools. Upload your own science rap for a chance to win a shout-out from GZA. Details are below.

In his upcoming solo album, “Dark Matter,” Wu-Tang Clan’s GZA raps about the Big Bang — the moment that the sun, moon, stars, planets and all matter contained within sprung from chaos, from nothing.

The legendary rapper performed the new material at Bronx Compass High School, where he hopes to pique students’ interest in science by introducing hip-hop to the lesson plan. In an area where test scores are low and students often disengaged, it’s his own attempt to bring order to the chaos.

“It’s inspired by science.” GZA told the students. “And it’s all about the universe.”

GZA has teamed up with Columbia University Teachers College professor Christopher Emdin and ten New York City public schools to use hip-hop to teach everything from biology to physics.

The project is music to ninth grader Keegan Dillion’s ears. “I had lost my passion for science, but now that they’re mixing it up with music, I actually feel I can get an A-plus.”

The musical experiment, called Science Genius B.A.T.T.L.E.S., is the brainchild of Emdin, who believes the curriculum will address low tests scores, especially among Latino and African American students who comprise 70 percent of New York City’s student body. (B.A.T.T.L.E.S. stands for Bring Attention to Transforming Teaching, Learning and Engagement in Science.)

Under Emdin’s direction, graduate students from Teachers College work closely with students on their science raps. The raps must rhyme, and the science must be solid. Then student finalists battle each other in an end-of-semester contest, which gets judged by GZA and published on the popular online site, “Rap Genius.”

Emdin rejects the notion that the hip-hop approach is a gimmick and believes the students will come away with a firm understanding of the scientific concepts.

“There are a lot of fly-by-night approaches to improve the classrooms, and the one thing they lack is cultural authenticity,” he said. Hip-hop is firmly rooted in urban culture, and GZA, he said, “is the consummate cultural ambassador.”

Excerpt from the album, “Dark Matter” by GZA
Before space and time, thought produced a speck of light
It was infinitely hot and so extremely bright.
Within the center of this great shining,
There was massive energy expanding in great timing.
Within this fireball was all of space,
A very special place with information and taste.
Literally the beginning, this cosmic clock was ticking
And allowed space to flow before spinning.
Everything we see around us: the sun, the moon, the stars,
Are millions of worlds that astound us
The universe in size was hard to fathom.
It was composed in a region small as a single atom,
Less than one-trillionth the size the point of a pen,
Microscopic but on a macro level within.

Create Your Own Science Rap

Enter your own science rap or hip-hop verse for a chance to win a PBS NewsHour mug signed by GZA of the Wu-Tang Clan along with a personal video shout-out from the rap legend himself. Our contest is modeled after the Science Genius competition, a partnership between GZA, Christopher Emdin and Rap Genius. Entries will be judged by Emdin and two of his Columbia University Teachers College graduate students.

How to submit a video: