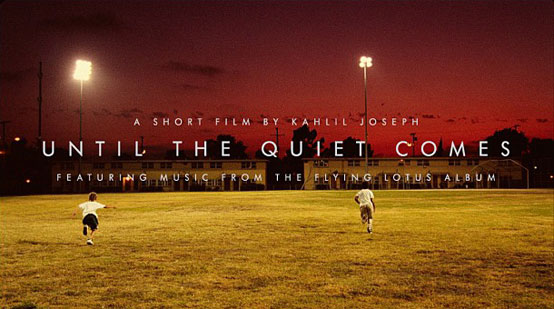 Leave it to Flying Lotus to step out of the stereotypical mode to present his music. The beat maestro hooked up with director Kahlil Joseph to unveil his latest cinematic endeavor, Until The Quiet Comes.

The short film, which adopts the same alias and features three tracks from FlyLo’s upcoming LP, gives us a lucid look into a myriad of concepts that seems to echo an air of wonder, tragedy and resurrection. Shot on 35 mm film in the Nickerson Gardens project in Watts, Joseph captures the essence of the neighborhood and its accompanying residents beautifully throughout his micro pièce de résistance.

Fans of the music experimentalist also get a taste from his new offering with three tracks, See Thru To U featuring Erykah Badu, Hunger and Getting There, both featuring Niki Randa, all of which are awesome for lack of a better term.

Check out the FlyLo and Joseph’s masterful short below and be sure to pre-order your copy of Until The Quiet Comes on iTunes.