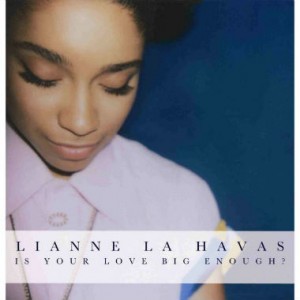 British singer Lianne La Havas will release her largely anticipated debut album entitled Is Your Love Big Enough? in the UK, on July 9th.  The Warner Brothers release can be found on iTunes, with a deluxe album featuring 5 bonus tracks also available.  On her official website, you can preview the entire album track by track with input from the artist as part of a 3 part series.

La Havas was born in London, England to a Greek father and Jamaican mother.  She attributes her parents’ diverse musical tastes as having the biggest influence on her music. She began singing at seven.  Her mother kept R&B from such singers as Jill Scott and Mary J. Blige on rotation, while her father, an accomplished multi-instrumentalist, taught her the basics of guitar and piano. Lianne wrote her first song at the age of 11 but did not learn to play the guitar until she was 18 years old.

La Havas was co-writer and performer in ‘The Paris Parade’ alongside Christian Pinchbeck (who designed the artwork for Lost & Found) and also is now part of the duo ‘Elephant’ (Memphis Industries). In 2010, Lianne signed to Warner Brothers Records, spending two years developing her songwriting skills before releasing music publicly.

Her first EP Lost & Found was released in October of 2011 on the Labour of Love label.   That same month, La Havas released a live EP, Live From LA, which was made available for free download on her website.   Her official debut single, “Lost & Found” was released in the UK in April and her debut album, Is Your Love Big Enough? will close the deal in just a couple of days so be sure to check it out.

You can also find some of Lianne’s live performances below, which we absolutely love.