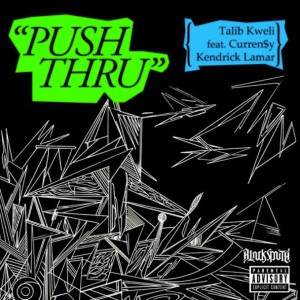 Talib Kweli released his new single “Push Thru” this week, as a warm up to his upcoming LP, “Prisoner of Conscious,” due out in October on Blacksmith/EMI. The track features heavy hitters Kendrick Lamar and Curren$y, and alongside Kweli the collaboration lends itself to a broad spectrum of lyrics based around their mutual experiences in NY, NOLA & LA. The overall production of the track is excellent, throw the video in which tours each of these three cities with rich cinematography complimenting powerful images and you’ve got our attention.

Today, Kweli announced that prior to his next album release will be a new mixtape, “Attack the Block” which will feature Ab-Soul, Jay Rock, Fashawn, Black Thought and production by 9th Wonder, Oh No and 88 Keys. The album release of “Prisoner of Conscious” will feature “Push Thru” and also collaborations with RZA, Melanie Fiona, Busta Rhymes and Miguel. We’ll be looking forward to listening to what will be two very different compilations of tracks by the legendary Kweli.