An Interview with Radius [Radius Etc.]

L|T|M takes a look at artist Radius, also known as Radius Etc.. This talented beat maker has a number of projects worth listening to, and lucky for us his skillset can be observed from many different angles as he’s collaborating with two groups in addition to his own solo projects.  Below, we’ll take a musical journey through his music and the groups he’s found unique sound with so please feel free to check out our  picks, and read about our new favorite artist.

To start, here are a couple of his own beats to set the stage:


Radius has been creating music and performing since 2001. His debut full length album ‘Neighborhood Suicide’ was released in 2008 on The Secret Life of Sound label. The album was well received starting a buzz from Chicago to Los Angeles, where he later spent much time strolling the aisles of Amoeba Records.  This warm welcome led to the follow up releases of the ‘Scatterbrain Tapes Vol.1’ and ‘Etc’ albums on the Plustapes (Chicago) and Grittygoat (NYC) labels. Using a combination of his MPC and vinyl he engages Jazz, House, and Hip-Hop to ‘outer space’.  His live performances became an extension of the music, experimenting and often improvising with a record player, kaoss pad and his beats to create a live electronic experience. You can also find his latest album, ‘Sleeping Wide Awake’, released earlier this year here. 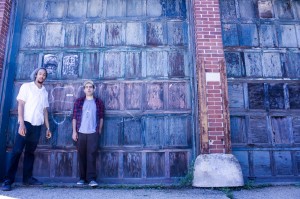 Together with Leo123, a heavy in the electronic music scene hailing from Mexico City, he is a member of Lagos. The duo experiments with their common influences and interests to produce a sound that is expressive and focused. A lot of their production queues come from 70’s Dub recordings and 80’s house to reflect their individual origins as well as their expansive regard to music. On August 25th, Lagos will perform at FMEL, the 5th annual Latin Electronic Music Festival & Art Exhibition being held in Chicago. FMEL is a week long event (Aug. 17-25) that unites electronic and digital concepts of sound, music and art created by Latin American artists with a global perspective for its fusion and diffusion.

Get a taste of Lagos below: 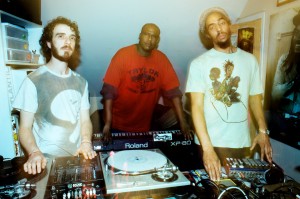 Last but certainly not least, Radius’ latest collaborative work with the group ‘Beyond Luck’ alongside DJ Moppy & Kenny Keys is due to be released in early September. The name of this trio fits with the concept as some tracks are one take sessions, and others are created in multiple takes and layers while the end result is always a premium music experience. L|T|M will be covering the release of their second album ‘Travelin’ Music Vol. 2′ later this month.. but in the meantime you can get their previous release, ‘Travelin’ Music Vol. 1′ here.

Also, sample a little newness below.

While you’re busy downloading all of this (you’re welcome), check out our exclusive in-depth interview with Radius:

How would you describe the music you are creating? I brand it “reality” music, everything that I create whether solo or with others is a reflection of my experiences, thoughts, feelings etc. I am a super city kid from South Chicago always moving around and listening to all sorts of music and I feel that my own music summarizes that. No real way for me to pinpoint it to just a few sentences. I allow the music to speak for it/myself, I have trouble explaining myself at times and I feel that the music does the job for me.

Tell us a little bit about your background and where you find your musical influences? As mentioned I am from South Chicago a neighborhood on the south east side of Chicago, which borders Avalon Park, South Shore and Stony Island. I have lived all over the city of Chicago from Logan Square to Uptown, became really exposed to hiphop and music in general in high school going to The Point in Hyde Park on the southside to breakdance etc.  I am very fortunate to come from a city and family that embraces various types of music. My mother and grandfather were the main musicians of the family. She played Clarinet and Tenor Saxophone in the band at CVS High School prior to my birth. My grandfather was into jazz and played upright 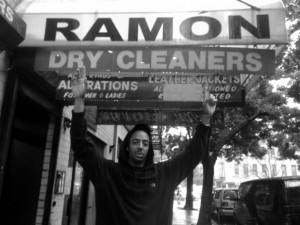 and electric bass. My musical influences come from the many outlets. I have been exposed to music overtime on this journey, especially seeing hip hop and eventually jazz and house music throughout the city. My record collection started from different pieces from members of the family.  It was real small, but when I really started digging on my own, I would go to Dr Wax(RIP), Second Hand Tunes(RIP), HiFi(RIP), Daves Records etc..

Describe the differences between your work with Lagos, Beyond Luck and as a solo act? Well to start the recording process for all are a lil different. With both LAGOS and Beyond Luck, we record overall into Ableton Live but with LAGOS (Leo 123 and I) even though our initial start was in the studio, 75% of that was done via the internet. We used iChat and Gmail, sending files back and forth. I moved to L.A. for a lil over a year and we worked on it off and on like that. When I came back to visit Chicago we laid the final joint “That Storm” in his studio.  Just like how we started “Radius 123”, Leo also is a true analog gear head so when I am over at his studio, I get to utilize more gear

The Beyond Luck stuff is all done within DJ Moppy’s studio a.k.a. the Aquarium, it’s where his show Cutz on Cuts takes place. We started a lot of that material like the ol school analog minimal takes way.  I would do patterns in my MPC, kaoss pads and other toys live and we would just keep building on top of that inside of Ableton. We really were shooting for that really loose, in the moment style of recording initially. The same way 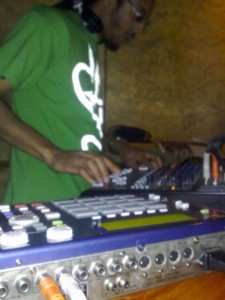 that progessive rock and fusion/avant garde jazz cats would record. Like Weather Report or Miles Davis’ Bitches Brew or bands like Soft Machine, Can, Pink Floyd etc. We utilized household products and basically more of whatever we could get our hands on. We brought Kenny Keys in a lil later, because we both worked with him prior to and felt that he fit the story we were trying to tell and could really elevate it more. As far as my own stuff, I do similar things as I do with both groups, but mostly within my MPC 1000.  When I am done with my sequences and have it all mixed, I record it live similar to the way that I perform at my shows. I do more overall sampling for my own stuff, I play synths and utilize other elements too but I tend to get off on how much I can alter a sample and structure it differently than how it was when I found it.

Where would you like to see your music go in the future, or what are areas you’d like to explore? Any and everywhere. I want to get more of this music out to as many people as possible. I would like to share these productions in a live setting as well as physical copies via wax, digital etc. I am working toward these things everyday. I am also getting more into instruments and building with more people both inside and outside of Chicago to come up with new creations. More artists are reaching out to me as I am reaching out to them. I just want to stay consistent and keep learning and growing personally and with my peers.

What upcoming projects do you have coming up that we can look forward to?  Beyond Luck has ‘Travelin’ Music vol.2′ coming out early September. We also plan to release more batches later in the year, eventually that will go toward a physical wax pressing. Leo 123 and I have been working on new material for LAGOS. I have been acquiring more shows personally and with both groups. I have another solo project called “Infinite Roots” that I need to add some details to, but it’s pretty much close to done. I just wanted to take some time to focus on the groups more. When I am grounded and settled within new personal space I plan to work more toward building a side project with Kenny Keys and also something with emcees. I think it’s time to get it moving on some rap shit again. A lot of garbage rap is out there and some of these boxer exposed clowns are repping the southside of Chicago(i.e. Chief Keef etc.), which is definitely some shit I don’t like.  That is not a good look by any means. People in Chicago can catch LAGOS at FMEL the Latin Electronic Music Festival 8/25. Beyond Luck will Be at Multi Kulti the 31st.